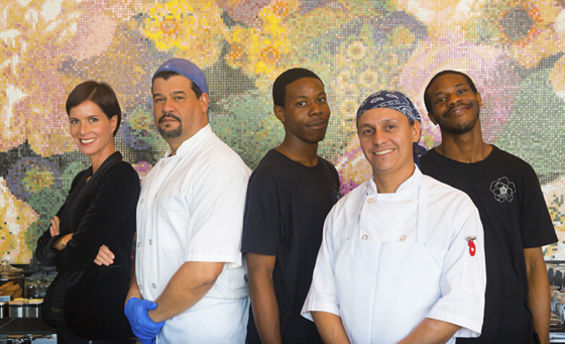 Thea Goldman (left) and her crew at Thea Pizzeria and Café.

At Thea Pizzeria and Café, rays of sunlight filter through a floor-to-ceiling glass wall. They warm the petite 38-seat café and illuminate scattered pizzas sprinkled with emerald leaves of baby arugula. Across from the window, a 30-square-foot, 210,000-piece glass mosaic mural made in Italy by luxury design brand Bisazza depicts pastel-hued peonies, roses, and daffodils. Luminous streams bounce from the gleaming mosaic onto several copper pendant Tom Dixon-like lamps suspended over sleek black tables and chairs. At the cozy restaurant, which opened in September, the music ranges from Etta James’s “At Last” to Nina Simone’s “I Put a Spell on You.” The pungent aroma of truffle oil wafts from the kitchen into the chic dining area.

Despite the setting, there aren’t many poised, middle-aged ladies decked out in designer garb and Tory Burch flats while lunching on overpriced Cobb salads. No one is conversing about the latest art auction fundraiser or showing off iPad photos of their well-groomed children. There are no exorbitantly priced dishes either. The costliest platter is seared salmon, topped with a slightly astringent lemon-caper sauce and paired with a refreshing white bean and red onion salad for just $16.

Thea Pizzeria isn’t located in the newly ritzy Design District or artsy Wynwood. It’s in Allapattah — an area west of I-95 better known for medical centers than eateries. The restaurant is situated inside the University of Miami Life Science and Technology Park.

In some ways, the café feels like the ideal location for ladies who lunch. The menu lists niçoise salad and chicken paillard. Roasted beets and toasted walnuts are as prominent here as oregano shakers at a run-of-the-mill pizza joint. Furnishings are charming, and the eatery makes a mean espresso (which is served with a bitty piece of chocolate chip biscotti).

But Thea avoids the stereotype. The eatery forgoes high prices, pretentiousness, or any sort of shyness about its undisguised femininity. It’s a casual place, ideal for gents who appreciate a cornichon-studded charcuterie platter and ladies who love arugula.

The restaurant is owned by Thea Goldman, an ex-partner of Wynwood‘s Joey’s, the eatery that helped launch the burgeoning arts neighborhood. Goldman — the ex-wife of Joey Goldman, the son of late real estate developer Tony Goldman — is a good-looking, London-born, pixie-cut dame who wears gray Superga sneakers and a black T-shirt printed with her new restaurant’s name while she darts from table to table. She opened in Allapattah with an ambition that matches the goal at her previous venture: to attract a mix of customers and become a pioneer in a culinarily underserved area. (The pizza, pasta, and salad menu at Thea is similar to that at Joey’s, except more concise.) Here, she aspires to develop the dining scene in the fledging Health District.

Dishes are consistent with pizzeria and café offerings. There are traditional pies — margherita; prosciutto and mozzarella; anchovy, tomato, and caper — and even bacon and egg. But most notable is the artichoke pizza, which opts for creamy, puréed artichoke hearts instead of standard tomato sauce. It comes topped with slivers of grana padano cheese, thick chunks of artichoke, and fresh arugula. Another pie features Gorgonzola, walnuts, truffle oil, and, yes, arugula. The crisp, thin-crusted cacio e pepe focaccia comes flecked with pecorino cheese and served alongside a mill for cracking fresh black pepper. It pairs daintily with cheese and cured meat platters such as grana padano, pecorino Toscano, mortadella, bresaola, prosciutto, and salami finocchiona, which are all served with crisp grissini.

Arugula makes an appearance in just about every dish, which isn’t necessarily a bad thing for fans of the peppery greens. Sprinkled with slivered mint and garnished with fresh goat cheese, the arugula and tomato salad gushes with brightness. The roasted beet salad is topped with the same greenery, as well as toasted walnuts and goat cheese. There are sandwiches and pastas too.

The latter group includes dishes such as rigatoni with stewed tomatoes, eggplant, and sliced sausage with dollops of fresh, creamy ricotta. It could have benefited from a kick of salt or, even better, a dash of spice. Much more delectable were the cheese ravioli, which Goldman imports from Paris and serves smothered in a sauce made with sage and nutty butter.

The few shortcomings relate to details, much like the rigatoni. Salmon requested medium-rare was delivered well-done. Slices of skirt steak — served alongside sautéed green beans, caramelized shallots, and an arugula-watercress salad with oven-roasted tomatoes — were ordered medium but arrived overcooked. Otherwise, the fare at Thea is refreshing, delectable, and delightfully unfussy.

Goldman was also lured to the location because she longed to hire staff from Overtown. Locals are enthusiastic to be involved in the growth of their own neighborhood, she says. And it seems she is right. Water glasses are consistently full, orders arrive in a timely manner, and service is attentive but not overbearing.

With Thea Pizzeria, Goldman is conducting an experiment in an area that lacks sophisticated dining options. In this case, the fashionable dining option doesn’t come at a high price. Although the eatery serves only breakfast and lunch, Goldman plans to expand with dinner service Fridays in the upcoming week. After that, it would come as no surprise if the Wynwood and Design District dining masses began heading west for something everyone can love: a tasty meal with good service and reasonable prices in a glamorous setting.