Republican presidential candidate Mitt Romney has called for a “change of course” in the Middle East, criticising US President Obama on foreign policy.

Speaking in Virginia, he lambasted the White House over an attack in Libya that killed the US ambassador.

He said he would put Iran “on notice” over its nuclear plans, and called for arms to go to Syrian rebels.

With four weeks to go before the election, polls show Mr Obama retains a foreign policy lead over his rival.

The former Massachusetts governor spoke at the Virginia Military Institute for his first major policy speech since the candidates met on Wednesday for their first face-to-face debate, on the US economy.

Mr Obama was widely seen as having lost the debate after a hesitant performance in Denver. Their vice-presidential running mates Joe Biden and Paul Ryan will debate on Thursday.

Mr Romney has repeatedly criticised the president for a foreign policy that he believes has left the US less respected and less powerful in the world. 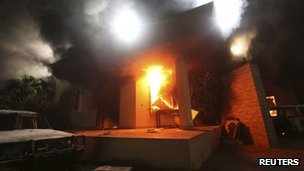 In his speech at the military institute he said he wanted to “offer a larger perspective on these tragic recent events” and share his vision for a “freer, more prosperous, and more peaceful world”.

Mr Romney linked the deadly attack in Benghazi, Libya to the president’s foreign policy and criticised his administration’s response.

“The attacks on America last month should not be seen as random acts,” Mr Romney said. “They are expressions of a larger struggle that is playing out across the broader Middle East – a region that is now in the midst of the most profound upheaval in a century.”

“This latest assault cannot be blamed on a reprehensible video insulting Islam, despite the administration’s attempts to convince us of that for so long.”

Initial reports said the protests and attacks were sparked by an anti-Islam film made in the US.

But since then, the Obama administration has said the incident in Benghazi, which killed US ambassador to Libya Chris Stevens and three others, involved some people “linked to groups affiliated with, or sympathetic to al-Qaeda”.

He wants America to aggressively support democrats in the face of tyranny, but he does not say what should happen when democracy produces results that America may not like”

Mr Romney was criticised at the time after saying that the administration appeared to “sympathise with those who waged the attacks”, before the situation in Libya and at another protest in Egypt had become clear.

The White House has faced repeated questions over the security situation in Benghazi in the run-up to the attack.

On Monday, US media reported that Ambassador Stevens wanted a specialised security team to stay past their August deployment, but that the staff was told to make-do “with less”.

A state department official told ABC News that the consulate’s security officer never made a specific request for the team to stay and that there was no net loss of security personnel.

Mr Romney – whose foreign affairs team includes advisers from the “realist” and “neo-conservative” wings of the Republican establishment – repeatedly accused Mr Obama of being soft in foreign affairs.

He was particularly tough on the administration’s policy in the Middle East, asserting: “Hope is not a strategy.”

Mr Romney said the US was missing “an historic opportunity to win new friends who share our values in the Middle East” and said there was “a longing for American leadership” in the region.

On Iran, Mr Romney said he would “not hesitate to impose new sanctions”, describing Tehran as “never closer” to a nuclear weapons capability.

“For the sake of peace, we must make clear to Iran through actions – not just words – that their nuclear pursuit will not be tolerated.” 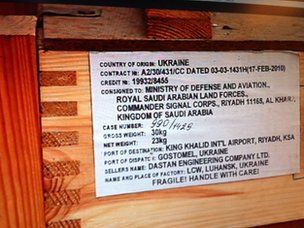 A crate of weapons in Aleppo, Syria, apparently intended for the Saudi military (Pic: Ian Pannell)

On Syria, Mr Romney said Mr Obama had “failed to lead” and said that his administration would work “with our partners to identify and organise those members of the [Syrian] opposition who share our values and ensure they obtain the arms they need to defeat Assad’s tanks, helicopters, and fighter jets”.

As the Republican candidate spoke, BBC News uncovered evidence suggesting that weapons intended for the Saudi military have been diverted to Syrian rebels in Aleppo.

Correspondent Ian Pannell saw three small crates of Ukrainian-made weapons – with a consignment note for the Saudi army – in a base being used by rebel fighters in Syria’s second city.

During his remarks, Mr Romney also gave strong words of support on Israel, arguing “the world must never see any daylight between our two nations”.

He also used the speech to argue against expected US defence cuts and for increased US Navy shipbuilding, as many as 15 a year, including three submarines.

Before Mr Romney spoke, the Obama campaign released an ad highlighting his gaffe-laden international trip this summer as well as his response to the Libya attack.

“We’re not going to be lectured by someone who has been an unmitigated disaster on foreign policy,” Obama campaign spokeswoman Jen Psaki said on Monday.

The two candidates will debate foreign policy in their last meeting on 22 October.