The London 2012 Olympics have ended with a spectacular musical closing ceremony and the official handover to the next host city, Rio de Janeiro.

The three-hour show featured some of the biggest names of British pop from decades past, including the Spice Girls, George Michael and Elbow.

Games chief Lord Coe said: “When our time came – Britain, we did it right.”

The official Games flag was handed to the mayor of Rio before the flame at the Olympic Stadium was extinguished.

President of the International Olympic Committee, Jacques Rogge, who declared the Games of the 30th Olympiad closed just before midnight, said: “We will never forget the smiles, the kindness and the support of the wonderful volunteers, the much-needed heroes of these Games.

“You, the spectators and the public, provided the soundtrack for these Games.

“Your enthusiastic cheers energised its competitors and brought a festive spirit to every Olympic venue.”

At the close of the ceremony, watched by 10,000 athletes and 80,000 spectators in the stadium along with 26 million TV viewers, the flame was extinguished in dramatic fashion.

Each nation will receive one of the cauldron’s 204 petals. 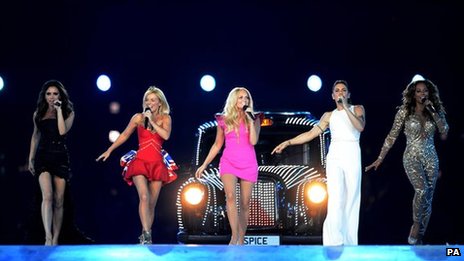 On Sunday, at the closing ceremony, fireworks went off above the east London stadium, the Who performed My Generation and the venue was transformed into a sea of red, white and blue confetti.

The finale, which began with Big Ben chiming, paid tribute to UK music, fashion and culture.

For a while yet, the British public can forget their Olympics are coming to an end – the light of the closing ceremony can take the edge off any sadness.

Artistic director Kim Gavin billed this as an unashamed after-show party. And it has been a pure and fairly straightforward celebration of the last 50 years of pop, with Elgar and Russell Brand thrown in.

Unlike the opening ceremony, it doesn’t have to set any scene or make any statement for a coming event. So why not roll out some of the top acts – from Annie Lennox to One Direction, Spices added.

All in the presence of a mosh pit full of Olympian athletes and the Duchess of Cambridge and Prince Harry, who have enjoyed these Games as much as the next sports fan.

Worrying about the Olympics being over? That’s for another time.

Prince Harry represented the Queen at the ceremony, which took place on top of a stage in the shape of a union jack and saw a volunteer cast of 3,500.

The show saw the Spice Girls re-form to sing Spice Up Your Life from the top of five London taxis, and a surprise performance from Take That, who sang their hit Rule the World. It had been thought they would not appear because Gary Barlow was mourning the loss of his daughter who was delivered stillborn last Saturday.

During the ceremonial part of the show, the Olympic flag was waved aloft by London Mayor Boris Johnson and passed by Mr Rogge into the hands of the Mayor of Rio, Eduardo Paes.

The Brazilian national anthem rang out and the stadium was transformed into the green and yellow colours of Brazil’s flag.

‘Lit up the world’

London 2012 chairman Lord Coe told the audience: “Today sees the closing of a wonderful Games in a wonderful city. 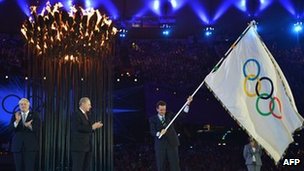 The Olympic flag was handed to the mayor of Rio

“We lit the flame and lit up the world.”

The official handover also saw a celebration of Rio’s mix of cultures, music and dance, bringing a carnival atmosphere to the proceedings.

Earlier, there was a riot of colour as the athletes entered the stadium, with four-time Olympic gold medallist sailor Ben Ainslie carrying the British flag and leading out Team GB.

The smiling athletes filled each section of the floor of the stadium, to the sound of Elbow playing their atmospheric hit, One Day Like This.

As is traditional during the closing ceremony, the final medals of the 2012 Olympics were handed out. On this occasion they went to the athletes in the men’s marathon, which was won by Uganda’s Stephen Kiprotich.

The 70,000 Games Maker volunteers were also thanked for their hard work during the 16 days of competition.

Home-grown fashion was celebrated with appearances from models Kate Moss and Naomi Campbell, both wearing the creations of the late Alexander McQueen, while British eccentricity also featured, with comedian Russell Brand singing the Beatles’ I am the Walrus from the top of a psychedelic bus.

Comedian Eric Idle drew much laughter when he performed a typically quirky version of Always Look on the Bright Side of Life, and Muse rocked the stadium with the official anthem of the Games, Survival.

The Games ended with the US topping the final medal table with 46 golds, followed by China with 38 golds. GB came third with 29 golds – their best tally since 1908.

The last day saw a final – and 29th gold – for Team GB, with boxer Anthony Joshua winning his super-heavyweight bout.

In all, 44 world records have been set during London 2012, and 117 Olympic records broken.

Among those to have set new world bests included Kenyan David Rudisha in the men’s 800m and the Jamaican sprint relay team, which included 100m and 200m gold medallist Usain Bolt.

The Paralympics is set to start on 29 August, with the revamped 560-acre (227-hectare) Olympic Park site – to be known as the Queen Elizabeth Olympic Park – then set to reopen from the first anniversary of the opening of the Games, on 27 July 2013.